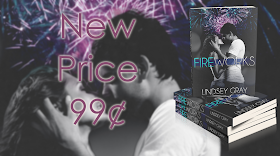 Lindsey Gray is turning another year older, but is still young at heart. To celebrate, she is lowering the price of her novella to 99¢ permanently! 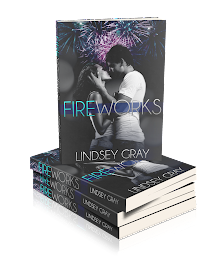 Sophie McKibbin finds herself back in Sam Crawford’s life after ten years. Unfortunately, Sam is dating Lola, Sophie’s high school nemesis. Lola dumps Sam the day before he was supposed to introduce his mystery girlfriend to his family over the Fourth of July holiday. With the looming fear of disappointing his mother once again and his long held feelings for Sophie, he asks her to take Lola’s place. With family feuds, an old flame, and feelings that have been locked away for a decade, there is bound to be some fireworks.

Add Fireworks to your Goodreads shelf!

Sam was waiting patiently for the barista to make his drink with two extra shots of espresso when he heard the tinkling laughter of two nurses ordering their own coffees.

He turned to see what all the fuss was about. The tall, dark haired nurse was showing the slightly shorter, brunette friend something on her cell phone.

“Venti, Lexi? I’m going to have such a sugar high by the time I get to the bottom of the cup.” The other one laughed.

Sam noticed something familiar about the brunette nurse at that moment and her voice confirmed it. For years, he’d dreamed of long, wavy brown hair, a pair of bright blue eyes, and heart shaped lips. Sam couldn’t believe it’d been almost ten years since he last saw her in his parents’ kitchen. There was no thought in what he did next, he acted on pure instinct.

“Why, if it isn’t little Miss Sophie McKibbin.”

Sophie turned her head in his direction, and a soft smile spread across her lips when she giggled. “Mr. Sam Crawford. Fancy meeting you here.”

Lexi looked between the smiling pair with confusion. “Someone fill me in, please?”

“Sorry, Lexi. Sam, this is my best friend and roommate Lexi Carter. Lexi, this is Sam Crawford. He’s from Halston, too, and happens to be the brother of my cousin’s wife,” Sophie explained.

“Well, that explains the greeting. I guess the two of you didn’t know you worked in the same hospital?” Lexi asked.

Sophie looked at him in surprise. “You work here?”

Sam rubbed the back of his neck nervously. He never imagined he would be so uncomfortable in Sophie’s presence, but she’d grown even more beautiful since he last saw her.

“Yes. I’m one of the evening hospital administrators. I’m assuming you two are part of our top notch nursing staff?”

“You must be the team Dr. Thomas has been bragging about.” Sam was stuck smiling as he gazed into her crystal-blue eyes. “We should all go out for a drink sometime.”

Sam dug his business card out of his pocket and wrote on the back. “This is my office number, but my cell is on the back.”

“Thanks.” Sophie’s cheeks reddened as she took the card from him.

“See you later.” He lifted his coffee cup to the two before he left the cafeteria.

Lexi grasped Sophie by the elbow and forced her into a nearby booth. “I need details. Who is that sex-on-a-stick, and why have I never met him before?”

Sophie shook her head as memories of a younger Sam flooded her mind.  The years had been very kind to him in her opinion. He was over six feet tall, with what appeared to be a lean yet muscled body. His light brown hair looked like it needed a trim, but was incredibly sexy at the same time. Like her own were, his eyes were blue, yet they seemed hold a sparkle she’d never seen before when he smiled.

“His younger sister and I were friends in high school. Sam was in college at that time, so I didn’t see much of him, but when I did . . .” Sophie got a faraway look in her eyes.

“You liked him!” Lexi smacked Sophie’s hand that lay on the table between them.

“Yep, I fell hard. I admit there was a bit of flirting, but nothing ever came of it.” Sophie ran her fingertips over her warm cheeks. “I thought I might see him a bit more once Caroline and my cousin, Drew, started dating, but he was working somewhere out east. Then I started dating Josh, and you know how that turned out.” Her relationship with Josh Reynolds had been a complete disaster, dictating how she had spent the last several years of her life.

“It’s time to get back on the horse, so to speak. I’m sure that cowboy wouldn’t mind a ride.”

Sophie laughed, but deep down in the dirty recesses of her mind, she could picture it happening. 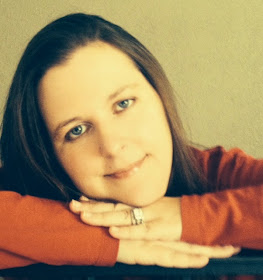 Lindsey Gray dreamed of being several different things as a child such as a doctor, an actress, and a chef, but none held her attention like putting pen to paper and creating her own world through words. She has written three full-length novels and one short story for The Writer's Coffee Shop Publishing House and is now taking the self-publishing leap with her novella, "Fireworks".

A mid-west native, Lindsey enjoys spending time with her husband and two children, reading almost anything she can get her hands on, and making life interesting at each and every turn.

Listen to Lindsey's Radio Show, Gray Matters, Tuesdays at 7pm EST on
The TMV Cafe or the TuneIn app

OTHER TITLES
(Click covers to go to Goodreads page)

Thank you for your comment. It will be added after the administrator screens for spam.